Paul Jabara and Friends, Part 2 (and that includes Whitney Houston) 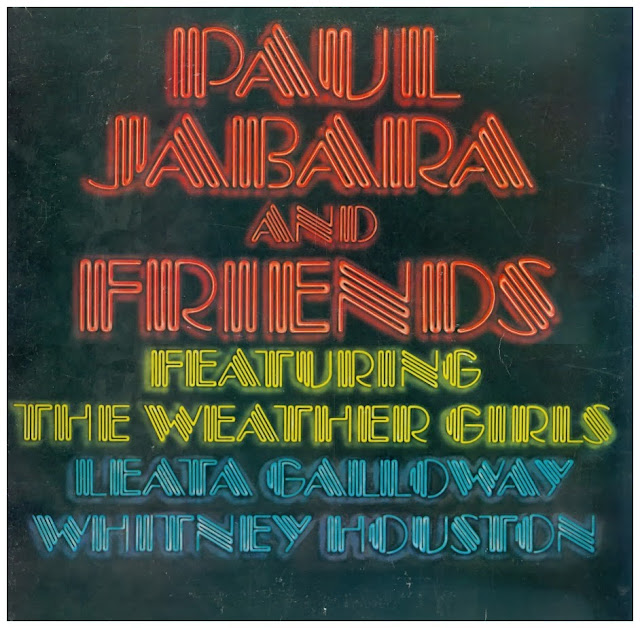 I did a blog entry in June of 2012 on Paul Jabara, a songwriter and producer genius who died way too soon (in 1992) and gave us monster hits by Donna Summer, Barbra Streisand, The Weather Girls and others, winning a slew of awards, including an Oscar and Grammy.

Please check out that entry for the introduction stuff.

When I did the blog I was missing the album shown above, which usually goes for, I think, outrageous prices. But I just found a copy on eBay for a bargain and grabbed it. Of course I already had the huge hit "It's Raining Men," but the 1983 album also includes a rather unknown track by the soon-to-be superstar Whitney Houston. You can hear her contribution to the LP, "Eternal Love," below.

But I love to give as much info as I can, so here's the back of the LP. 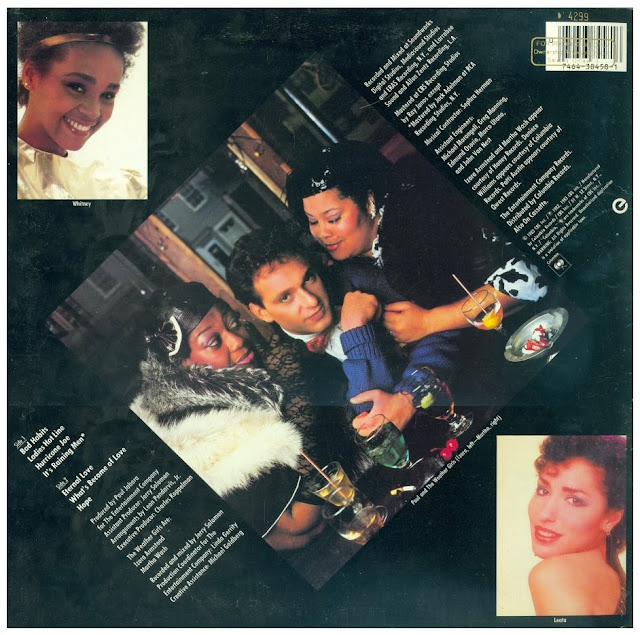 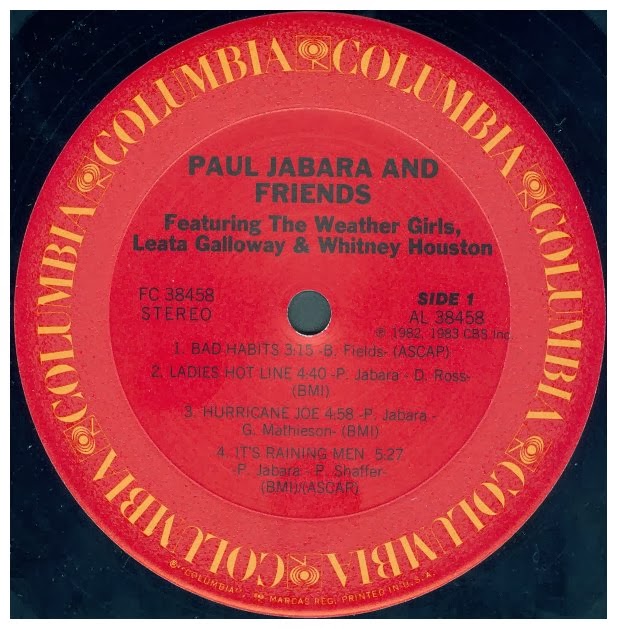 The LP jacket and disc does not do a good job at identifying the vocalists, so I'll do it: 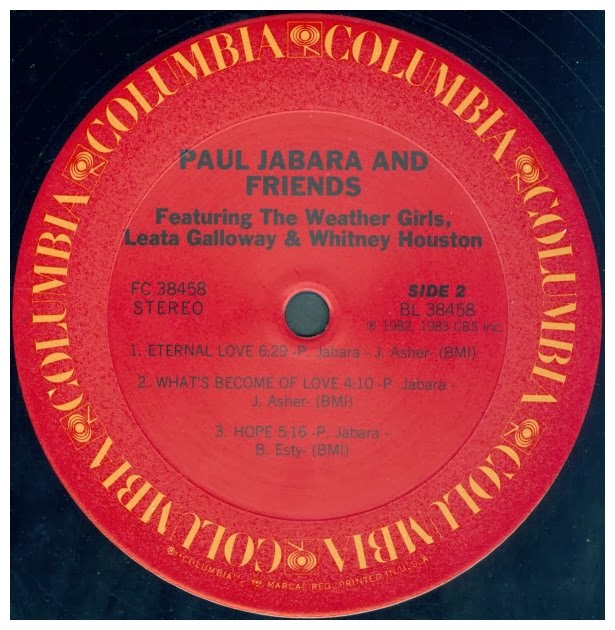 And, as you've been patient enough to read this far, you can listen to the entire album at the link. 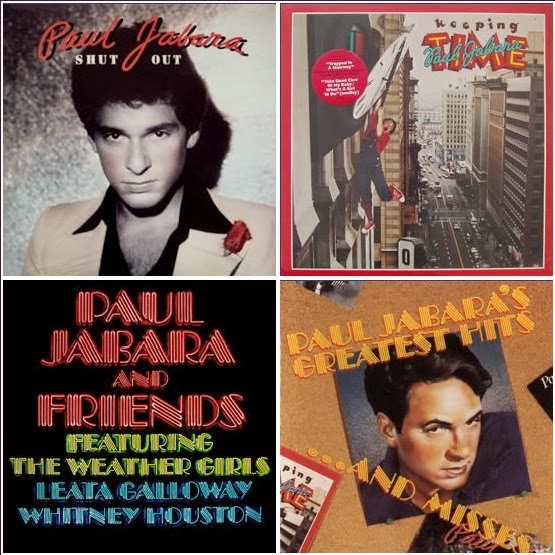 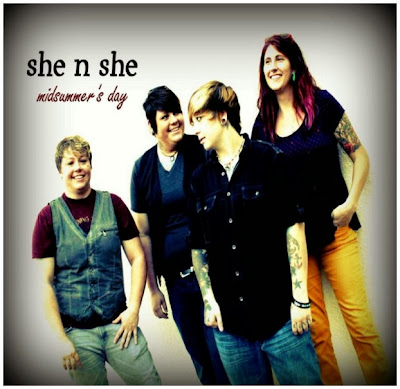 This morning I've been listening to the latest album by the Augusta, Georgia, band She N She, and they are Brandy Douglas, Drea Suarez and  Kate Anderson-Grijalva, and I am so, so pleased. The CD is called "Midsummer's Day" and was released late in 2012, and I have the website RightOutTV to thank for giving me a head's up on them. I was immediately drawn in, captured by the vocals. For example, check out the song "Baby I've Got You."

Okay, now go to their Reverbnation page and here's where I found myself listening to the rest of the album and more.


She N She at Reverbnation

You can pretty much start at the top of the list, with "Secrets," but I encourge you not to miss the, gasp, woman-to-woman lyrics of "Pathetic." Or the haunting (also lyrically lesbian) "I Can't Stay," or the title track "Midsummer's Day." I could go on.... 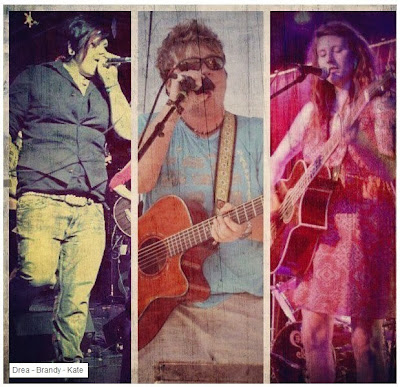 Antigone Rising - Santa, You Owe Me

It happens every year, so I'm used to it, I guess...I finish uploading my Queer Music Heritage Xmas Special, around December 1st, and like clockwork, a few artists come out with smokin' xmas songs, too late to be included. So far the one that really makes me wish I had it a couple weeks sooner is by Antigone Rising. 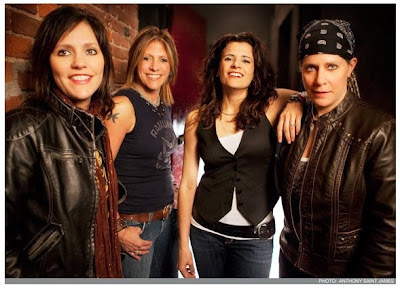 They've had a good year, their last CD, called "23 Red," is still riding high, and they have a terrific new single, "That Was the Whiskey," and, oh yeah, that's founding member Kristin Ellis-Henderson and her wife Sarah on the October 8th cover of Time Magazine... 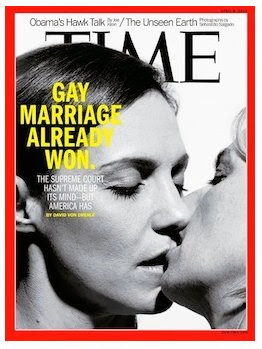 And, that song I told you about...well, it even has same sex lyrics in one verse:

I want a take vacation for the rest of my life
sipping salty margaritas with my beautiful wife
I want a whole lotta naughty and a little less nice
Santa, you owe me that

High Risk (This Is Some Deep Lesbian Music History) 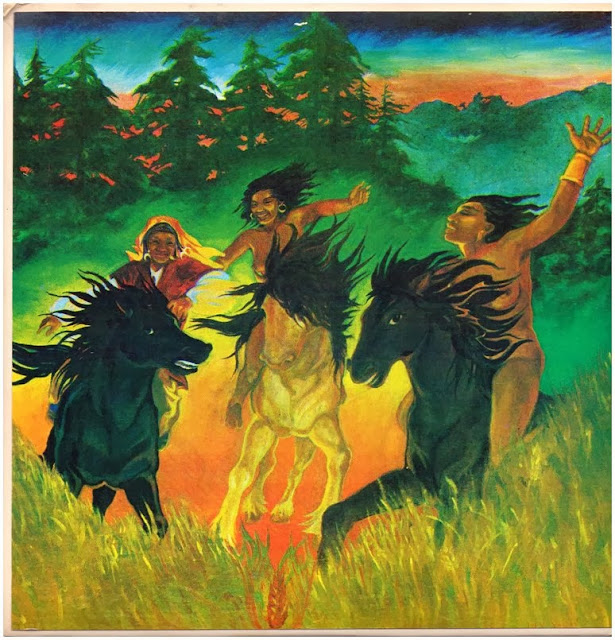 Who were those wild women? Well, they are on the cover of one of the very rarest lesbian 45 rpm recordings. It took me years to track down my own copy, so of course I want to share the story. The music admittedly (at least to me) is not the type to grab a listener, but its use was really intended for a soundtrack of a film. In 1975 Donna Deitch....wait, you know that name....she was the Director of the 1986 classic lesbian film "Dessert Hearts." Anyway, back in 1975 she produced her first film, a 48-minute documentary called "Woman to Woman" (see review) and the soundtrack included two songs that became the single above. 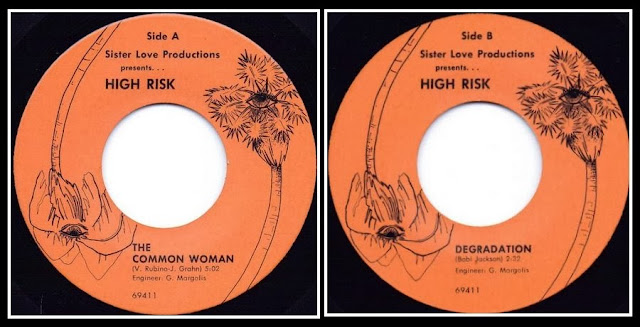 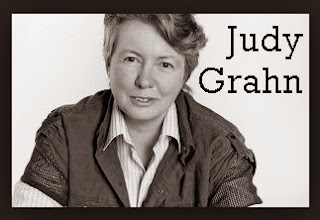 Historically, the "Common Woman" side is of more interest, as it is based on a poem by iconic lesbian poet Judy Grahn. In the band itself was one name I know, Virginia Rubino, as she was in the group BeBe K'Roche, and their eponymous 1976 album was the third released by Olivia Records. And their most known song was "Kahlua Mama." Olivia's first release was in 1974, so again, this was early in the Women's Music Movement. 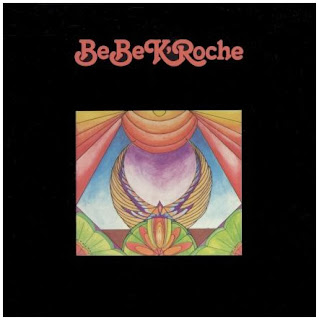 Here's a side trivia note only I would care about...Olivia Records distributed many releases by artists not actually on the label, and the 45 above was the very first one that the label distributed, in 1975. Here's the back cover and a close up. 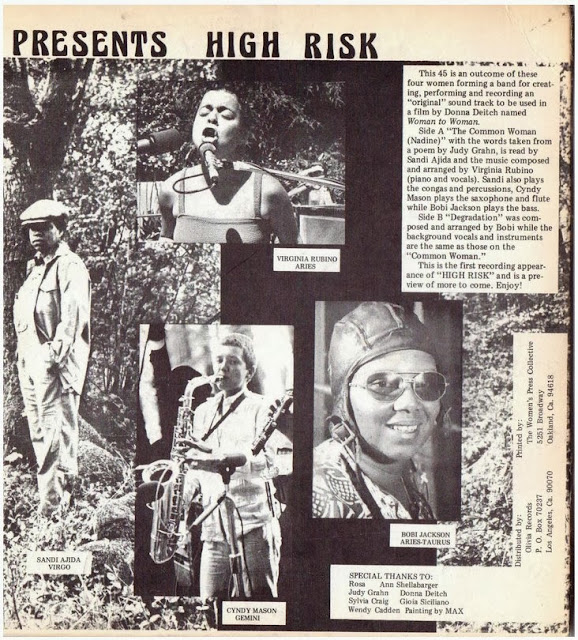 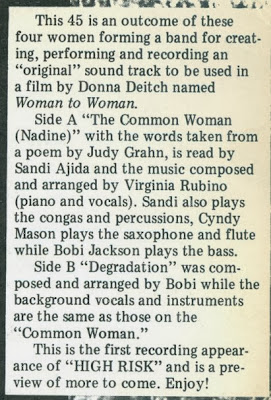 You can stream both songs at the links...

"Degradation" is the side I prefer, the more political side, and I know of no other release by this quartet (Virginia Rubino, Sandi Ajida, Cyndy Mason and Bobi Jackson).

And, back to my original question...who were those wild women...:) The EP only credits the work as "Painting by Max," but a google image search found that the artist was Max Dashu, who has a long history of preserving women's history, and has the website Suppressed Histories, which is worth a visit.

The NAMES Quilt: How to Find an Individual Panel 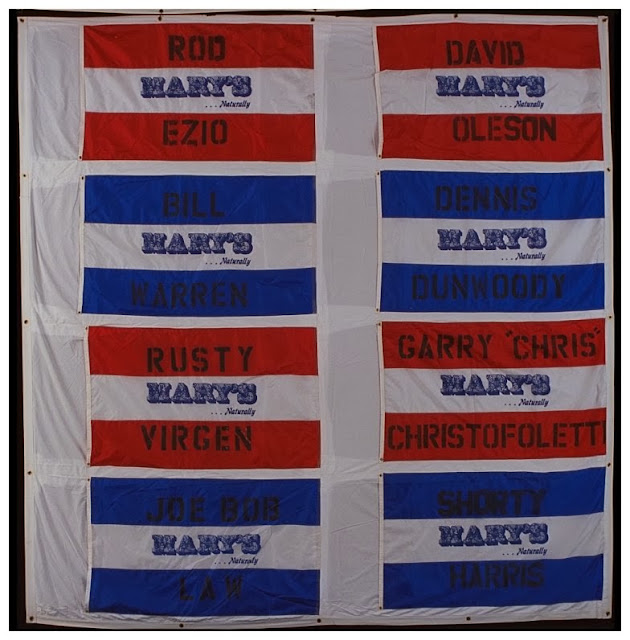 When you look at the NAMES Quilt in a larger perspective, it is a stunning contribution to our history, and just my talking about it or sending you to some internet links cannot remotely touch the impact, personal and global, of seeing it in person. I saw the entire display in Washington DC in 1988, and...here's the personal...I could not tear myself away from the block of panels that included one for my then-recently departed partner. I sat there for hours. 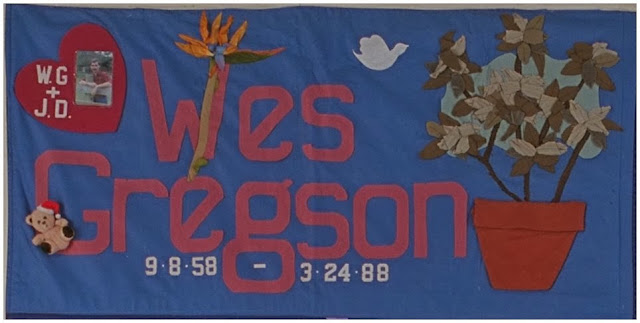 I've often visited the website of the NAMES Quilt and while it's a wonderful effort, I was left wanting to see larger images of the individual panels. On that site it's difficult to read any but the largest writing on them. In 2012 a project by Microsoft was announced, as a different website set up like a google earth approach. You can see the entire "field" of thousands and thousands of blocks.... And then zoom in on a much closer view.... And finally, zoom closer to the image shown at the top of this page. It's for some of the customers of the Houston bar Mary's Naturally.

What was missing from the Microsoft display is any search ability, but there IS a way to find a particular panel. It's a bit tedious, but it IS possible. It uses BOTH websites and I am sharing the instructions in this blog entry.

First go to the NAMES Project site, to their search page

And, for example, find the matches for "Mary's Naturally" (there are three relevant ones). One of them is block #134. Now visit the Microsoft site

Row 2 begins with #104, count over to #134, about a third of the way over. Yes, this gets quite tedious if you want something in the vast middle, but the point is, it's doable.

One more example, Michael McAdory, who died in 1984, was a driving force in Houston in those early years of the crisis in AIDS education and he helped found the KS/AIDS Foundation. An AIDS residence center was named after him, McAdory House. From the NAMES site I found his panel in block 226, and on the map navigated to find it. 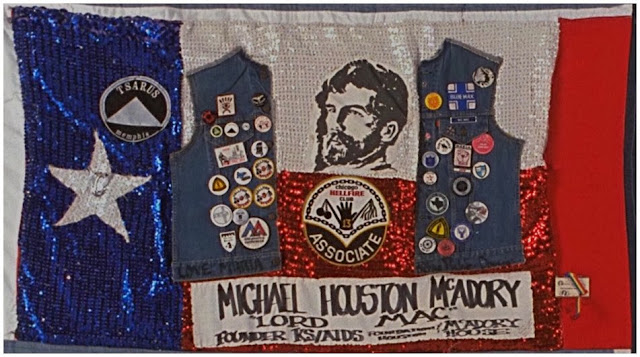 Oh, yeah, in 2007 I did a Queer Music Heritage show on "Songs About AIDS." There are many aspects of the AIDS crisis I wanted to cover, the emotional areas of grief, anger, sympathy, the political and social approaches, some of the musical history, and a variety of genres, including musicals and choruses. And you can get a taste of it all in this three-hour show. 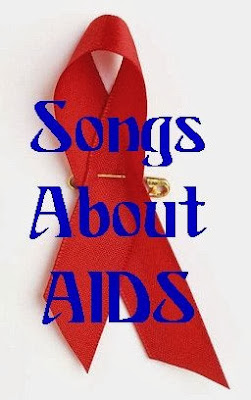 Let me indulge in my own personal AIDS memorial. Of course I've experienced the loss of many more friends than shown below, but I want to honor those closest to me, including my partner Wes, who died in 1988. 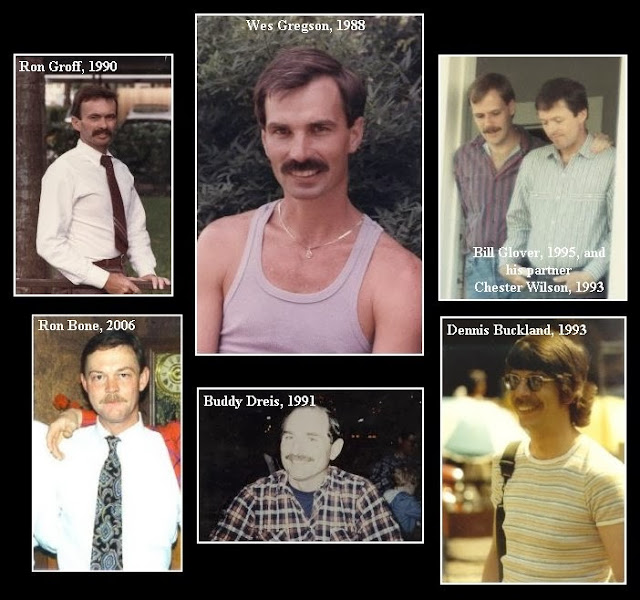