Against Me! New EP "True Trans" 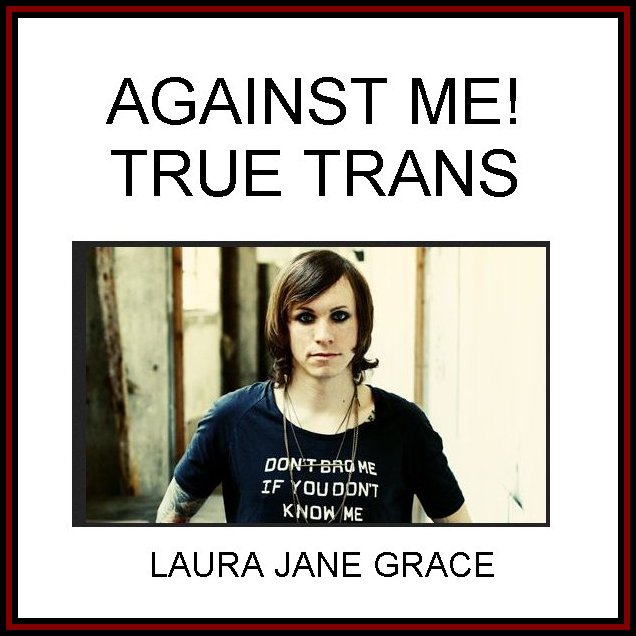 The Florida punk rock band Against Me! was formed in 1997 by lead singer and guitarist Tom Gable, and their albums have become more successful with each release over the years. A year ago they made news not often heard in that music genre, Gable was transitioning to be a woman, and taking the name Laura Jane Grace. And he and the band are on a very public track, working on their sixth release. It's called "Transgender Dysphoria Blues," and I can't wait to hear the whole album. 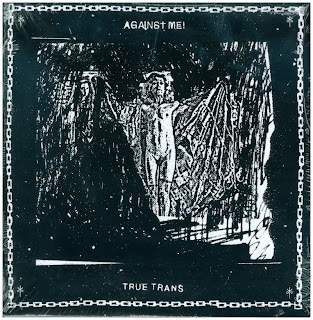 As part of the promotion in July they released an EP with two tracks likely from the new CD. These were offered as free downloads from their site for a few weeks, but that time has passed. But you can still buy the vinyl 7" record, which I did. As they were offering the songs free, I will let you hear them below.

Of course I prefer the second one, as it is Very lyrically trans. 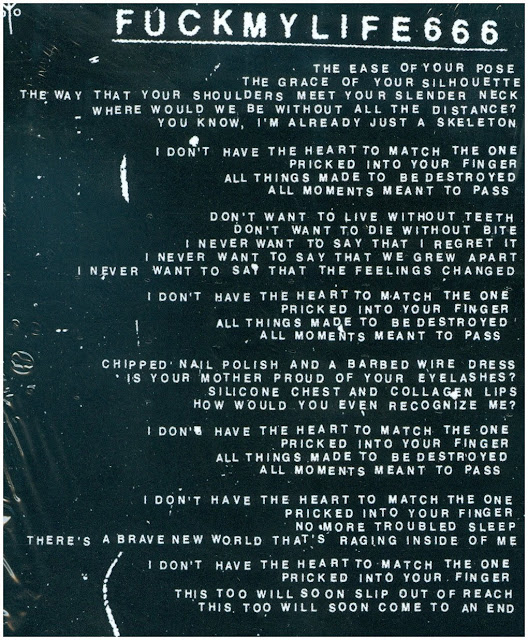 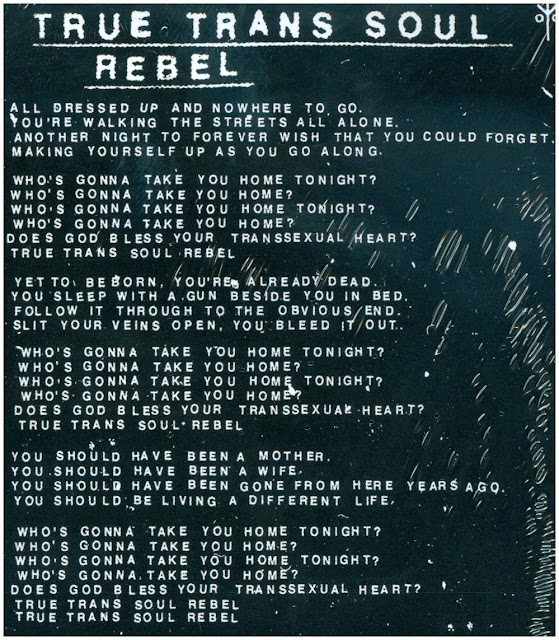 You can get a taste of the title track from "Transgender Dysphoria Blues" in this live video. 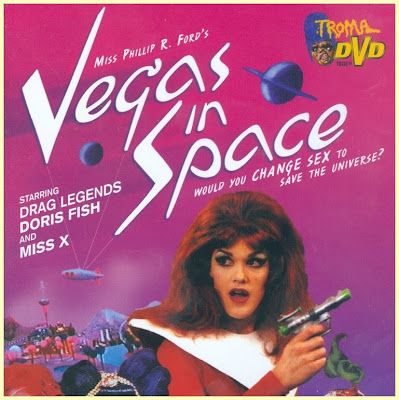 Ah, how do I tell you about "Vegas in Space"? Well, it's CAMP with all capitol letters, and so bad it's fascinating. Yes, it's intentionally bad, but they sort of make it work...let's call it a sub-cult classic. It's a 1991 release co-written and starring Doris Fish, one of the most popular drag queens in San Francisco in the late 1970's through the end of the 1980's. It was directed by Philip R. Ford, and this is science-fiction with no emphasis on science. The plot? Okay, here goes.  Three male space travelers from Earth are sent to the Planet Clitoris to save that world from destruction. Per the "Articles of the Venus Convention," only women are allowed on the planet, so Captain Dan Tracy (Doris Fish) and his two lieutenants must become women, by taking sex reversal pills. So, why couldn't they just send women on the mission? What, and give up the chance to do all that terrible drag?! 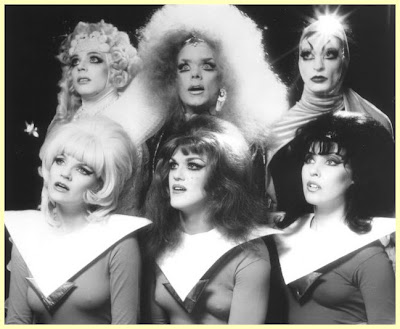 Their mission is under cover, so they pose as showgirls who perform a mid-20th century lounge act for the Empress while investigating the theft of Girlinium, the rare gem that keeps the planet stable. Still with me? Okay, now that they are showgirls it gives the excuse to make this a musical. The soundtrack I believe was only privately released, and only on cassette tape. I'm fortunate the tape's producer (Bob Davis) sent me my copy, many years ago. As for the songs, many are quite short but three you may want to check out are listed below, click to hear them. 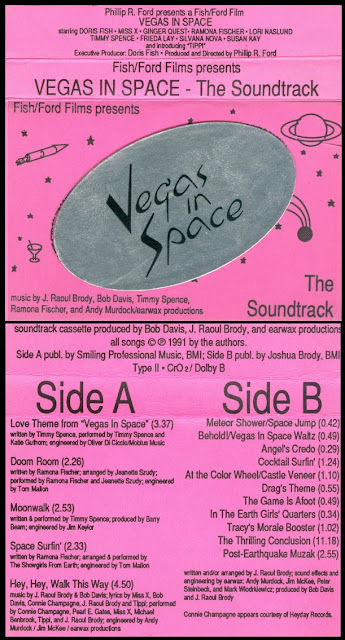 Drag personality Connie Champagne guests on that last track, and she's the only one with any claim of being able to sing. The film is out on DVD now, with lots of bonus material, including a campy Director's Commentary, and interviews. As they had no budget, the film took ten years to complete and they scraped it into existence with the crudest of props and special effects. Doris Fish died of AIDS in 1991. 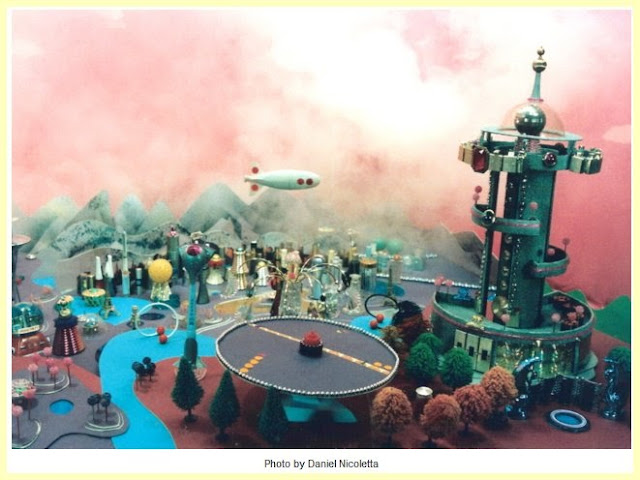 What? You want more? Here's a page of my site with the film's poster and a review. 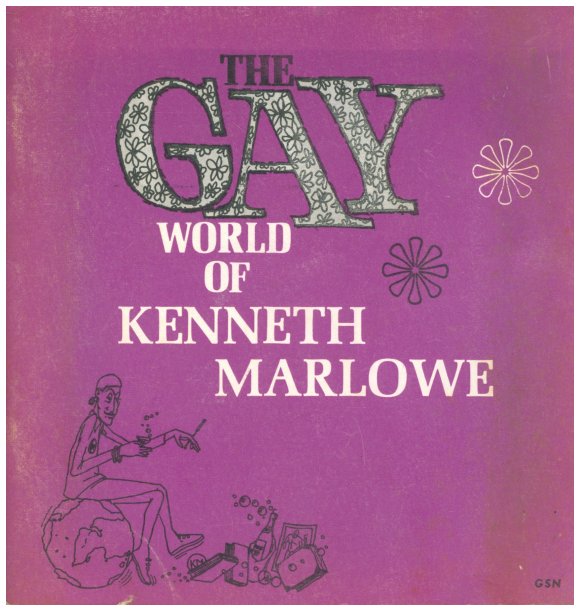 Kenneth Marlowe was one of the gayest and most openly homosexual of personalities of the 1960's. He went from a 1940's/1950's drag performer, to being a madam, to being the author of several books, to becoming a transsexual. In 1964 he published his famous autobiography
"Mr. Madam: Confessions of a Male Madam," to much attention and several printings. Here is the original book cover, and a later edition. 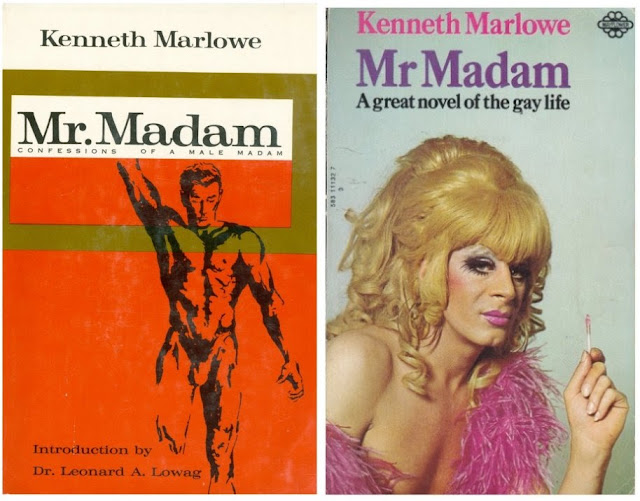 I have quite a bit of information on Marlowe on a page of my website, here:
http://www.queermusicheritage.com/f-marlowe-kenneth.html

But this blog entry is focused on two cartoon books he published, "The Gay World" and "The Delicate World...of Kenneth Marlowe," both in 1966. The must have been privately printed, as they do not contain any Library of Congress number of information. Here's the cover of the second volume. 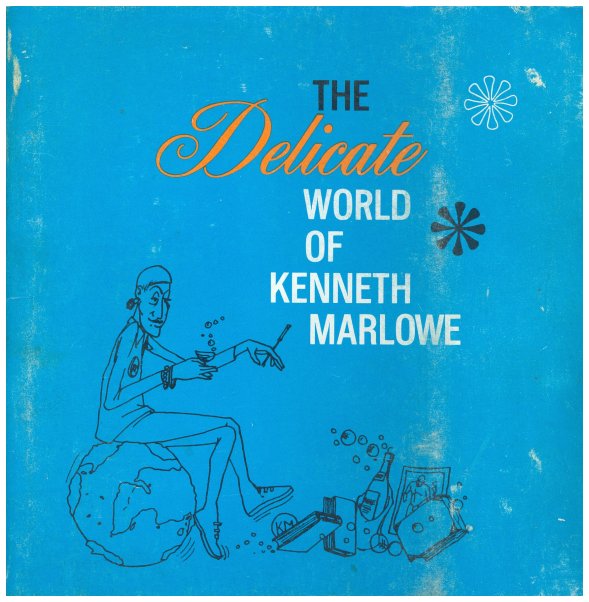 This is a rare opportunity to see what passed as "gay humor" as the time. None of this these days would get an LOL, but it's still a sign of those times. Also of note is the never shy Marlowe used himself as a character in quite of few of his own cartoons. A few examples: 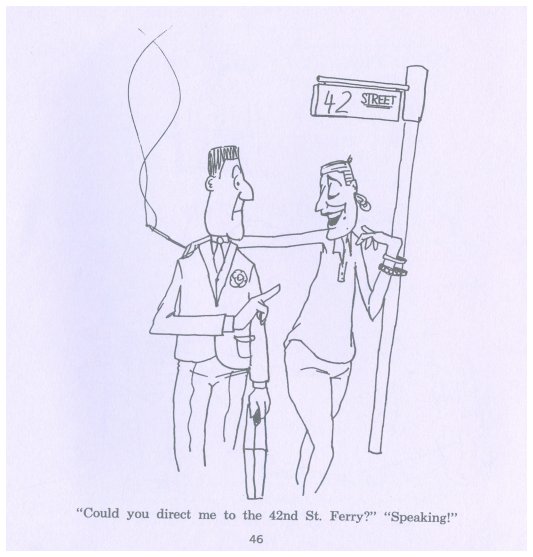 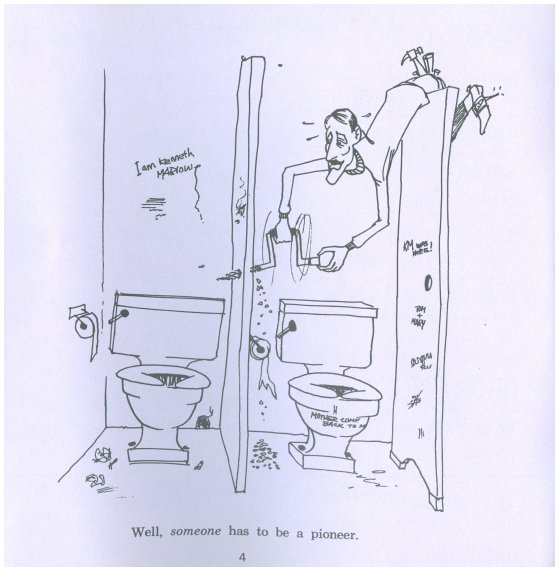 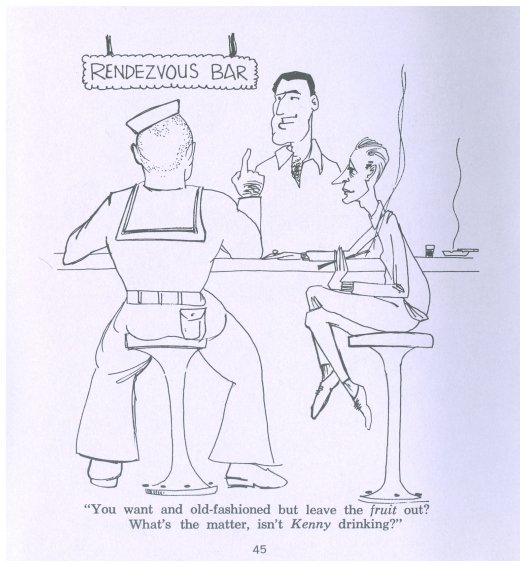 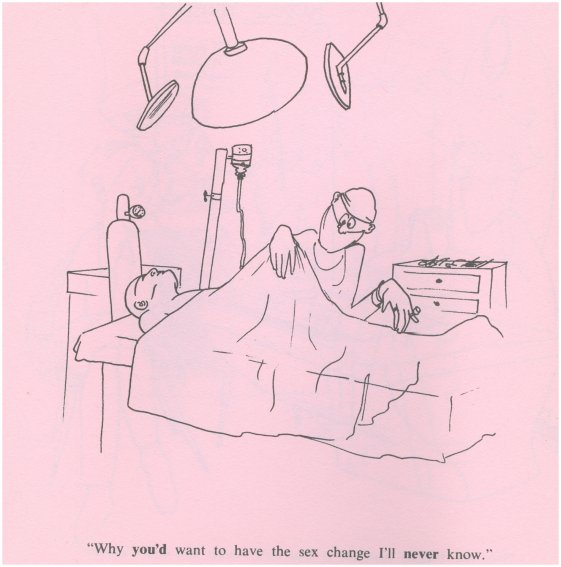 And, if that's not enough for you, I've scanned every cartoon in both books:

In July 2010 a thread on Facebook touched on Kenneth Marlowe, and Armistead Maupin added this fascinating comment:"I met Kenneth Marlow in 1972 when he was in the process of becoming Kate Marlowe. He threw a fundraising Big Band dance at which Sally Rand (then 70) performed her famous Fan Dance under a VERY DIM blue bulb. He called the evening "The Ball to End All Balls." When I interviewed her later (Kate) she told me she'd grown up in a whorehouse in Winnemucca, Nevada. I'm not at all sure if that was true but it was a fascinating detail, so I appropriated it for Anna Madrigal in "Tales of the City" 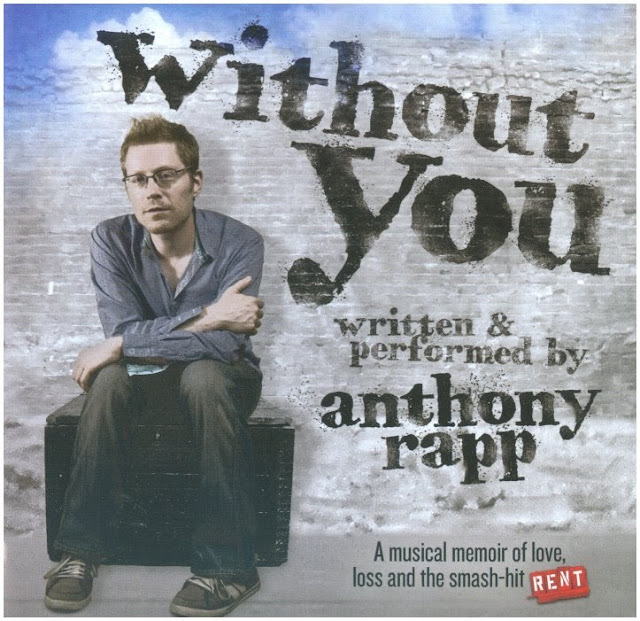 I love the musical "Rent," and when the show came out I especially became a fan of Anthony Rapp, who played videographer Mark Cohen in the original Broadway cast, in 1996. "Rent" was a success beyond the definition of success, and while this show is, so far, his major claim to fame, he has done a number of prominent roles in the theatre, film and on television. And, I'm kind of also partial to his solo CD "Look Around," from 2000, which has (gasp) some lyrically gay songs. 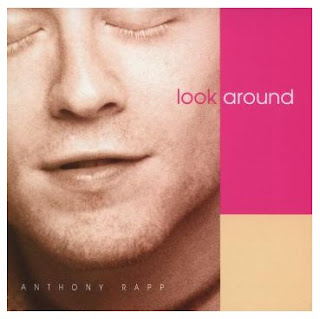 In 2006 he released a book, a memoir, called "Without You: A Memoir of Love, Loss, and the Musical Rent." And last year that became a CD show, of his performance. And...I...loved....it. It not only goes through the story of how he became involved with "Rent," but also is the very moving story of his dealing with the illness and then death of his mother from cancer. More than once I misted up just listening to it. It's a musical and emotional triumph. 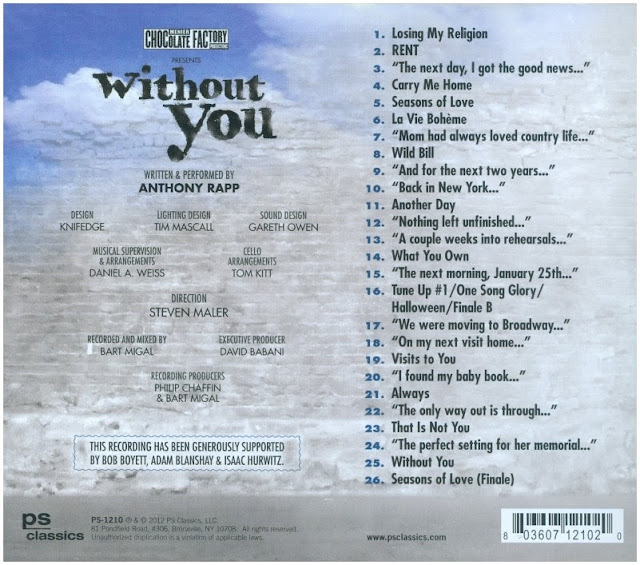 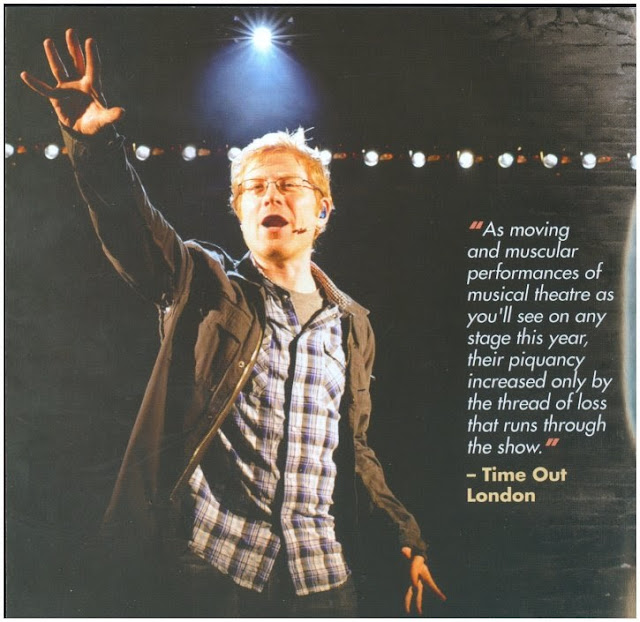 One Common Heartbeat, A Leather Anthem 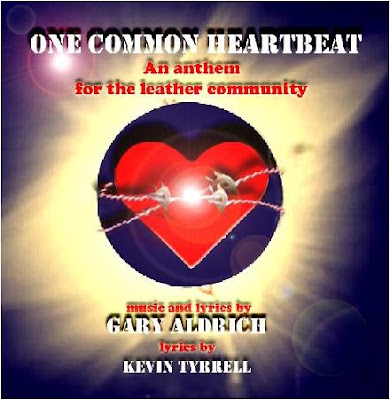 In 1998 on the twentieth anniversary of International Mr. Leather, in Chicago, the leather community got an anthem. The founder of IML, Chuck Renslow suggested one was needed and approached Gary Aldrich to write it. Aldrich and Kevin Tyrrell supplied the music and lyrics and Aldrich, known for his operatic singing in venues including Lincoln Center and the Kennedy Center, took the lead. Among those supplying backup voices were members of the Chicago Gay Men's Chorus. The CD of the almost five minute song is still for sale, with proceeds going to Chicago's Leather Archives & Museum. And everything you'd want to know about the anthem can be found at its site. 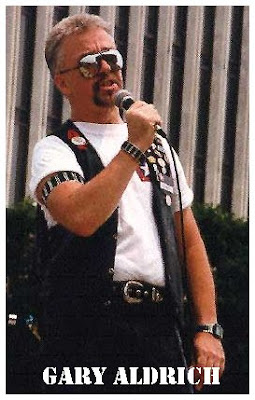 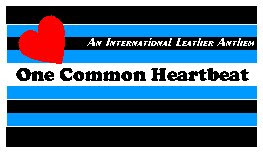 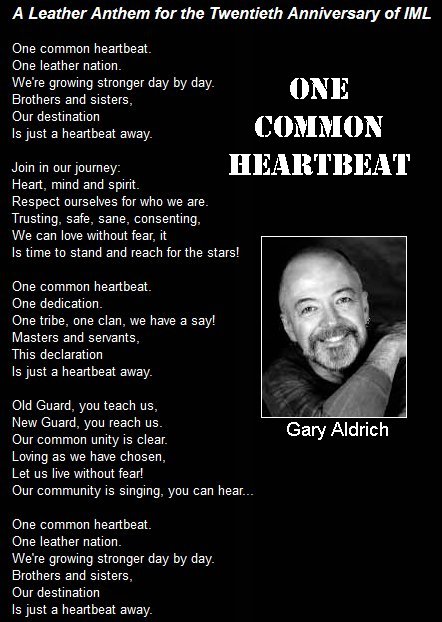 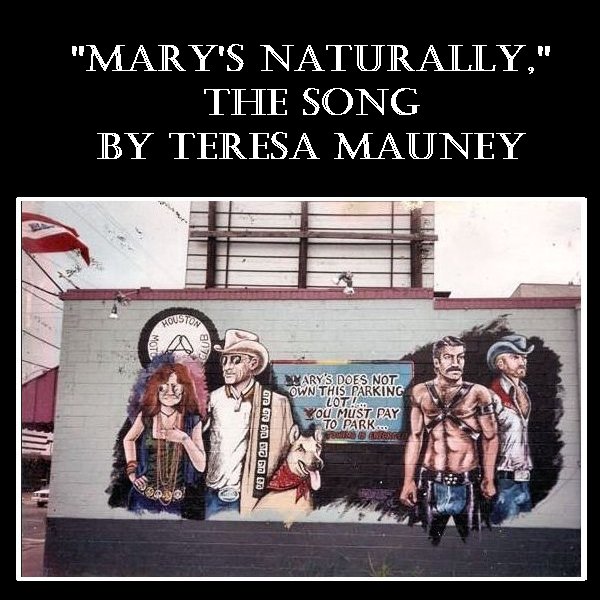 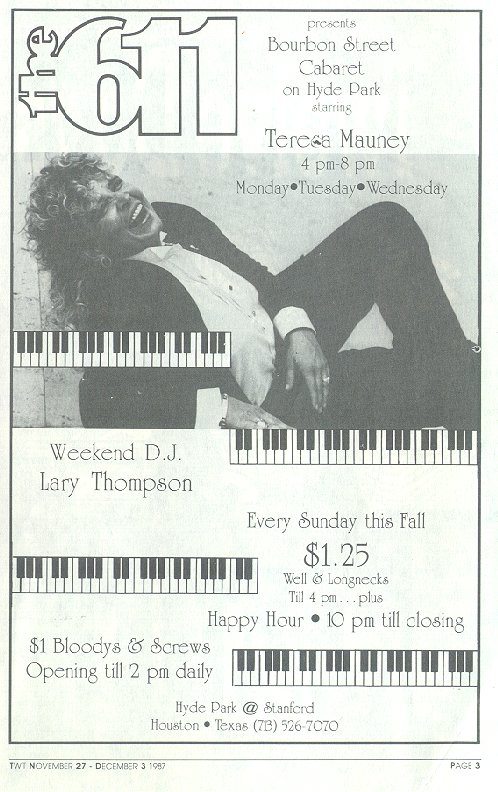 Paisley Fields - Windows Fogged Up In Your Pickup Truck 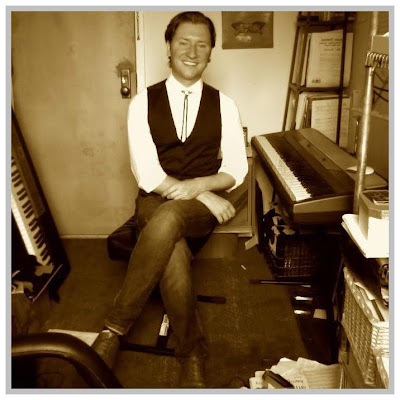 The last time I played the music of James Wilson on my OutRadio show, it was under the name of his act then called Frightened Cellar. But some folks just keep evolving, and how he and long-time collaborator Jessica Kimple are known as The Paisley Fields, and I'm delighted with their new video. And what's not to like, it's a gay love story mini-movie that I didn't want to end. See what you think... 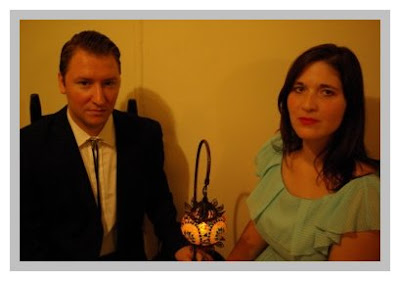 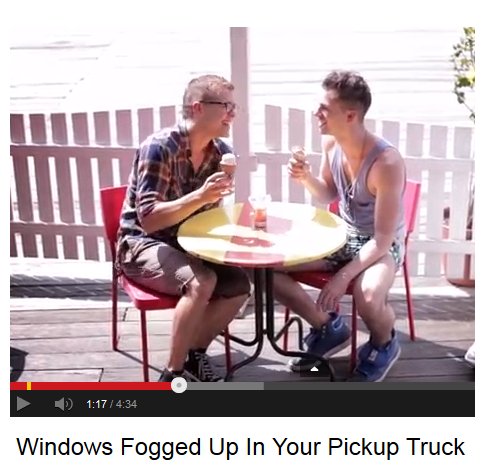